Congratulations to our FTC team 6934 for winning the Connect Award and for hosting their 2nd annual Jersey Shore Winter Meet. Special thanks for Joan B. for making all the homemade soup and for CY for organizing the great volunteer help.  It was an amazing event.

Congratulations our sister FLL team won the Judges Award for their enthusiasm and amazing project! 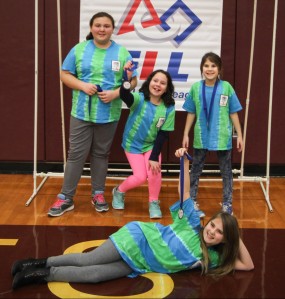 Our GS FLL Team 307 the Gear Girls finished 7th place out of 15 teams with a final score of 125 points.  The organizers, judges and fellow FLL coaches were impressed with our girls research project and that we blended girls from two different counties.  Overall they had an excellent qualifier @Oxford HS. Way to go Girls!

Here is a link to pictures for the event

We will “Skype” or postpone this awesome opportunity to help out a local rookie team @Brick Memorial HS on Oct 8th after school.  We are waiting for the school to give us permission to visit the school.    We hope to assist their team through out the season. 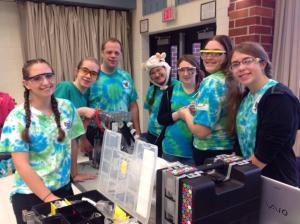 Self Assembling Robots – Harvard University scientists have built a 1,000-strong robot army which can form itself into shapes with very little human input. (Article)

FTC – Have you read your summer read yet? Part 1 of the FTC Game Manual?  After you read it once, here is a good comparison between last years and this with changes highlighted from last year to this.

FTC Team Afoofa released this FIRST analysis (FTC forums)
———————–
–> 4″ COTS wheel size limitation is removed => This means we are allowed to use bigger COTS wheels. (Commercial Off The Shelf – meaning purchased)
–> Lot more COTS parts: Anything with single degree of freedom (ex: COTS axles of all kinds)
–> A new motor type: AM-2964 ( A maximum total of eight (8) TETRIX /AM-2964 motors (in any combination)…)
–> Servos (Quarter scale or small) – any brand is allowed. Any combination is allowed. No limit on quarter scales, as long as servo controller can drive.
–> SuperPro can powered by external 9V battery. (This a an additional controller for self made sensors and such)
–> Circuits connected to SuperPro can be driven by this external 9V battery also. [ This is great news for adding special computing controllers such as Arduino, RasPi, BeagleBone, Intel Galileo, Launchpad] we may have to clarify this: All power used in the circuits connected to the Prototype Board must be derived from the power connections provided within the board including the board’s optional additional 9V battery.
Circuits may connect only to the designated connections provided by the Prototype Board. (i.e. A4-A0, B5-B0, 3V, 4V, 9V, 5V, GND) or SuperPro Protype Board (i.e., A3-A0, B7-B0, S3-S0, O1-O0, WR, RD, 3V, 9V, 5V, GND).
–> Processor on SuperPro board is allowed to re-Program

I don’t see this “vi. The processor included in the Prototype Board may not be reprogrammed”.

Thanks to the FLL teams that are sharing their pictures and guesses to the model placements for 2014 World Class Field Build. We will know Official Kick Off, Aug 26th

I applaud innovative idea’s in technology and I have to recommend these recent installments of pure awesomeness!!!

We are working with NJFTC to host this years “Ramp it up!” Summer Outreach program and hosting our Jersey Shore FTC Party!

Our sponsors, the Girl Scouts of the Jersey Shore has graciously offered the PAC and is willing to assist with providing food for the events!

Also here is a Tentative Calendar for the 2014-2015 FTC season. (Excel)  Note Bold Dates are confirmed and all dates are subject to changes. Check back often or check the official calandar @NJFTC Current Events

The All Girl Experience of FTC!

If you’ve ever attended an FTC event, you’ll no doubt agree that it is predominantly a male activity. For reasons that are too nebulous to catalog and more than a bit fraught to “explain,” boys flock to engineering and robots and all things remotely controlled.

That’s not to say that girls don’t flock to it, but the tendency of many, I’d venture to say, is to hang back when faced with the sheer intensity of the boys’ confidence, enthusiasm, and perhaps even obsession. The girls may have just as strong an interest, but they approach it all more obliquely and cautiously.

The outcome is often that, in a coed environment, you have a team that is primarily boys with maybe one or two girls, and those girls are the ones who are the most experienced, confident, or simply impervious to intimidation. I’d even go so far as to guess that those girls are there because they were inspired by a male relative, like a brother who was way into LEGO building, or an engineer father.

While there’s nothing really wrong with this scenario (some of you are undoubtedly nodding as I describe your team) what gets shoved aside in this picture are…the rest of the girls. The shoving may even be literal, as the boys move a bit too eagerly to grab a wrench, get on the floor and fix their bot.

For six years now I’ve coached and taught robotics to FTC 2963, Lincoln Robotics, an all-girls team from Lincoln School for girls in Providence, RI.  From the beginning, my classes have attracted the sort of girls you might imagine – computer lovers, LEGO builders, game geeks, strong STEM students. But the girls I’ve also seen come into the program are the ones who, in a coed environment, might steer clear of robotics – actors, artists, musicians – and many of them have never tried robotics or programming before.

More than once I’ve had to reassure them as they lead with the disclaimer, “I’ve never done anything like this before so I’m probably going to be bad at it.” It’s a revealing statement, one I think far fewer boys are moved to make. The girl’s unabashed displays of ignorance and lack of confidence are a sort of protection against failure, priming me as their teacher to have low expectations for their performance.

The flip side, however, is that these students tend to display the kind of humility that leaves them wide open for success. Because they don’t walk into class with the need to show off their abilities, they are free of any baggage, or bad habits, that could hold them or their team back during the process. The compact that develops between us is that I’ll approach them with the expectation that they will take risks – build a complex mechanism, use tools to fabricate a custom part, incorporate sensors into their programs – if they agree to let go of their high standards and live with the many small failures that are certain to happen.

Very soon what I see are girls at the bench using a rotary tool or a drill, even if they’ve never picked up a power tool in their lives. Girls, who months earlier didn’t know a servo from a motor, are building a chassis and wiring it for both. All of them feel the rush of success when a bot comes alive and drives for the first time, that big payoff moment that has hooked many young engineers. As one of my second-year students said, “We feel empowered to build new and innovative mechanisms for our robot.” Empowered – her word, not mine – is the key element here.

The results of this empowerment are tangible.  Girls from Lincoln’s robotics program have attended MIT, Harvard, Carnegie Mellon, Georgia Tech, WPI, and other big-name engineering schools. This year in our FTC class, 11 girls have built the most complex chassis and mechanisms we’ve ever had at Lincoln, all without a single one of them ever having been to an FTC tournament.

This year’s bot, “EarthQuaker”, sports a 10-gear drive train, a rack-and-pinion/chain-and-sprocket lifting tower, a custom-fabricated sheet metal cube basket, and an autonomous program that employs line following and IR seeking. The girls, many of whom are taking robotics for their second year, all began the year with no experience building TETRIX robots. Since September, they have learned to design experimentally, tolerate failures, innovate on the fly, fabricate parts that don’t exist and generally think like engineers. They’ve also learned to work as a team, an essential skill that tends to have a rocky start in September, but by tournament time has settled into a well-oiled machine.

In fact, during this year’s Rhode Island FTC last month, we stalled out a motor in practice, a wheel fall off during competition, and a program-related driving issue – all of which were fixed on the spot with no gnashing of teeth or finger-pointing.

Even if all of my students go on to careers outside of engineering, I like to think that they’ve learned to trust themselves and others in an environment of pressure, risk, and unpredictable complications. For me, the most rewarding moments are watching them on FTC tournament day when mechanical bits go radically wrong in ways they never have before. Without looking at me, sometimes without even speaking words to each other, those girls eagerly grab a wrench, get on the floor, and fix their bot.

Thank you Arielle, Kristin, and Mariellen for representing Team 6934 @ PPPL GSCSJ STEM fair day! The CEO of GSCSJ stopped by and had an opportunity to drive our robot!

It was a great showing and we met a lot of Girl Scouts that seemed interested in robotics! We couldn’t have done it without the support of the Ramsay and Budd families providing rides and assisted with the equipment!

Wow check it out!  Carnegie Mellon’s New EV3 Programming Curriculum Online for FREE! There are other available sections with the paid version, but the amount they give for free is amazing!   Also check out their offerings for free summer training opportunities!

Included is the new FTC “Game Reveal”  We are registered to attend!